As alot of you know…..we have just returned from a two week vacation where we traveled to Idaho and Utah to visit family.  It was lovely.   Jackson traveled very well. (with ALOT of pre-planning on our part!)

One of the highlights was visiting the Hill Aerospace Museum 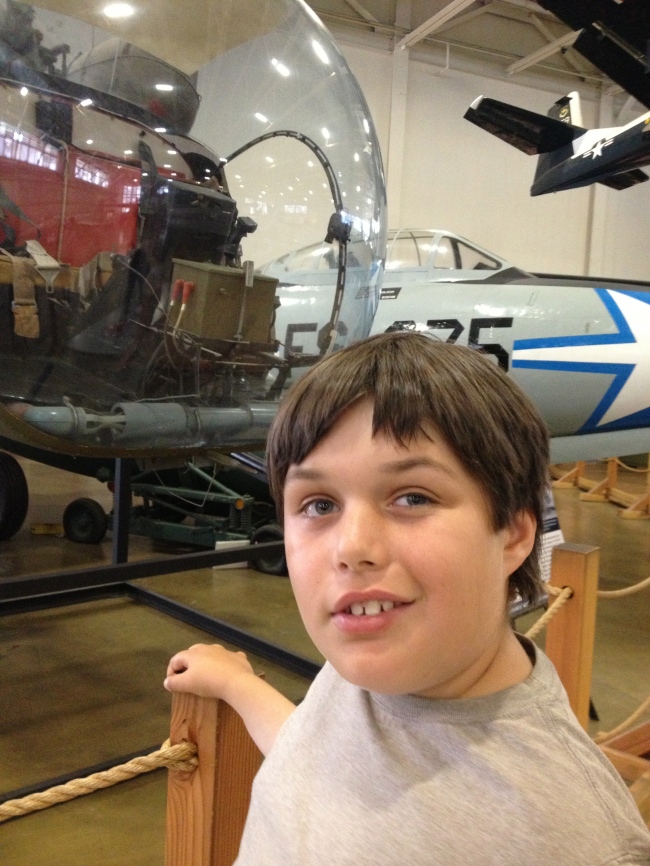 THIS, is an open letter to the woman that openly stopped and stared at Jackson at one point in our visit there.

Hello.
I understand that you might have been a little put off or uncomfortable with what you witnessed   at the Hill Air Force Air Museum.
Let me break it down for you so that you can put it in perspective.
My son , Jack, is autistic.
Jack loves, and I mean LOVES, helicopters and airplanes.  They are endlessly fascinating to him on many levels.  So that day he had reached Nirvana, Vallhalla, and Heaven all rolled into one.  It was bonus points that the hangar was cool and not brightly lit.  That echo?  A big draw, too!

And that cool ( to the touch) concrete floor was the coup de gras on that hot summer day.
He laid down on the floor so that he could see the propellers from his favorite angle:
LOOKING UP.

And that is why he yelled (at the top of his lungs) the word FAN.
What he did next was a sensory thing.  The floor was cool and slick and perfect to push oneself across on one’s back.  If YOU were a severely autistic child, YOU probably would have done the same thing.
Really.
You would have.
And it would have felt AWESOME!
Jackson, at that moment, was deliriously happy.

Now, my 13 year old self really wanted to say to you in a snippy voice:
“take a picture, it’ll last longer”

The grown woman/mother in me really would have liked you to have at least try to catch my eye.  Perhaps smile.  Maybe raise an eyebrow.  Even ask, “Is he ok?”

But no.
You openly stared.
You stood there.  You frowned.
You stared.

I thought about offering up the phrase “He’s autistic” as a way of explanation.
But decided against it.

You were closed.
You were not open to any information as far as I could tell.
You turned smartly on your heel and walked away.
My guess is that when you went home Jack and I became a dinner table story.  A cautionary tale- perhaps a narration of bad parenting.

And you know what?  It’s OK.  It really is.
Because Jack and I know the truth– and we had a really great time.

What We’re Talking About